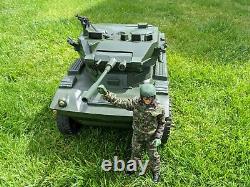 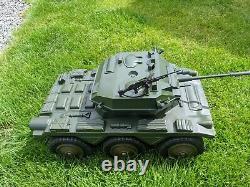 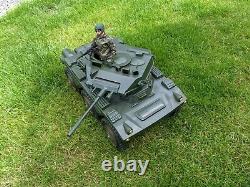 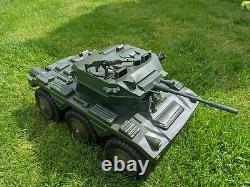 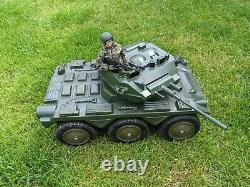 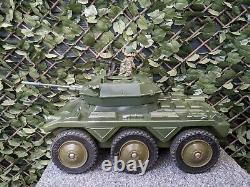 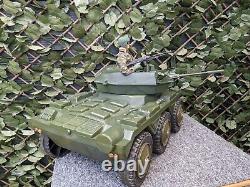 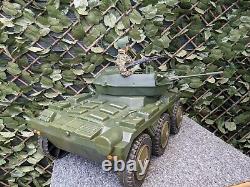 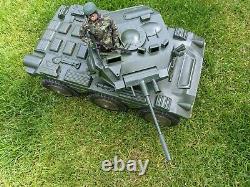 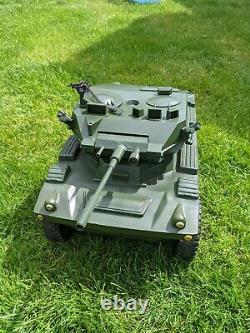 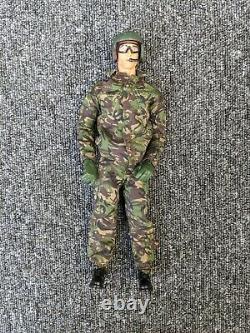 As a hobby I started to restore/repair this vintage Action Man Cherilea Sharna 6x6 modelled after the highly capable Saladin Armoured car FV601. The gun and coax MG were completely broken so I replaced them with something I modelled after the Rarden cannon fitted to the Scimitar tank. In addition I replaced the turret hatch with another from a different vehicle, but it's a good fit and looks the part. I also fitted a mount for the commanders MG.

I added 2 lots of smoke grenade launchers and coloured studs for the indicator and vehicle lights. The body was paint stained so I have flashed it over with some NATO Green paint. The wheels are the original colour for comparison.

I accept it's not 100% original, but I think I have done some sympathetic mods and it is very sturdy the gun stays unsupported and is very robust. The repairs are not invisible but arent obvious either. Good for display or play. Pictured here with a HM Armed Forces figure who comes with it. Originally for 12" Action Man but as you can see is a great fit for these 10-11" figures as well.

The reimagined 30mm cannon is inspired by a prototype Saladin made later in the production run. Whilst not original it is relevant to the type and was a logical progression for a wheeled recon vehicle. Being fast and having enough firepower to take on light armoured vehicles and infantry but not being overly weighed down with heavy armour and a large calibre gun. I think it looks really good but my interest lies in more modern figures and vehicles.